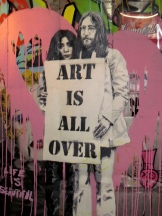 With all this glitz and glamour what happens to the local working Miami artist?

[Story and photos by Franceasca Seiden]

The 10th anniversary of Art Basel Miami broke the attendance record. With 22 fairs and counting the entire city of Miami Beach, Downtown Miami, Wynwood and the Design District was infiltrated with art dealers, collectors, artists, gallerists and enthusiasts. You couldn’t throw a rock without hitting a warehouse converted into gallery space, live concert or satellite art fair.

Basel provided all types of genres from the Contemporary, Modern, Classic, and Installation to catching commission graffiti artists paint their blank walls and buildings. Live music performances included James Murphy from LCD Soundsystem at Grand Central, Yelle and Miami Horror at Electric Pickle and TV on The Radio at Ricochet. 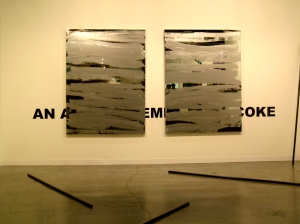 Popular on-going satellite fairs like Pulse, Art Miami, Nada and Scope delivered eclectic and beautiful pieces as well as big sales. LA’s own and Exit Through The Gift Shop controversial documentarian Mr. Brainwash (aka Thierry Guetta) had two shows; one on the beach renting out a large building situated directly on Collins, the exterior featuring storm troopers around all sides, giant Mr. Potato Head greeting patrons and a banner which read “Love is the Answer” stenciled on a sign held by Einstein. The other smaller display but party space was in Wynwood sponsored by Absolute Miami. Pop surreal artist Aleloop’s mobile installation and live music festival showcased ten uniquely painted mini coopers and forty performers all being documented by underground music documentarian, Iris B. Cegarra.

Celebrities attended in droves making some regular attendees question if Basel is following in the Sundance Film Festival footsteps with a week of oversaturated famous tourists. Will Smith, Diddy, Michael Douglas, Catherine Zeta Jones, the Hilton sisters, Naomi Campbell and Tilda Swinton, major art collectors, philanthropists, artists, business moguls, curators, museum directors and fashion designers, were all seen around town. From art collectors Peter Brandt to Nancy Specter (Curator of the Guggenheim) and Gucci owner Francois Pinault (who is considered to have the largest contemporary art collection in the world) all flew in for Basel 2011.

For those of you who are unaware, Art Basel Switzerland takes place in June, and Miami Beach Art Basel has now become their official sister show. The city of Miami and Art Basel arrange for pedestrians to be conveniently picked up and dropped off from all fairs between the beach and downtown so you don’t have to hassle with parking or even walking if you don’t want to. 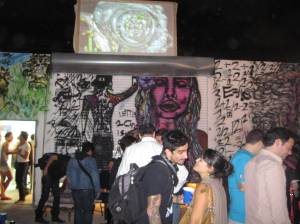 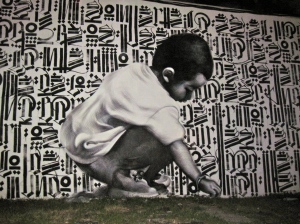 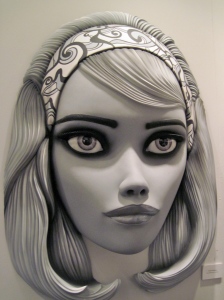 So with all this glitz and glamour what happens to the local working Miami artist? Without the right representation or connections or space, it’s easy to get lost in the shuffle. That’s why smaller art fairs have popped up in recent years via Miami’s Independent Thinkers. Their goal as a grass roots organization is to provide a platform for local artists, filmmakers, and musicians to showcase their work. Similarly, Fountain art fair is another fair located in Wynwood that showcases only New York based multi-media visual artists.

In its 10th year running, art sales were at an all time high even with our economy in slumps, unemployment and the Occupy movement. The rise of the young collector, noticeably the young female collector sparked up talk about a new generation of the art collector. Art is not just for the rich and famous, it’s for everyone. During the 5 days multi-billion dollar deals are made, but this doesn’t stop once the fairs close, this happens all year round making Miami the international hub for the art dealing business. With Art Basel’s wheels in motion, each year it will grow, so I suggest get in their while you can. 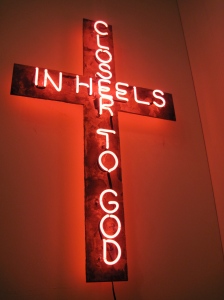 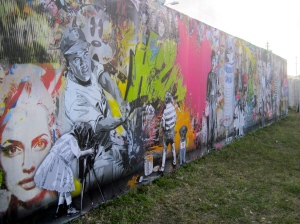 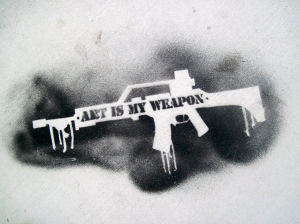 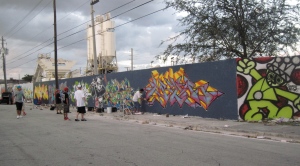 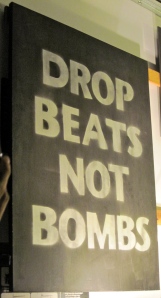 [All photos by Franceasca Seiden]