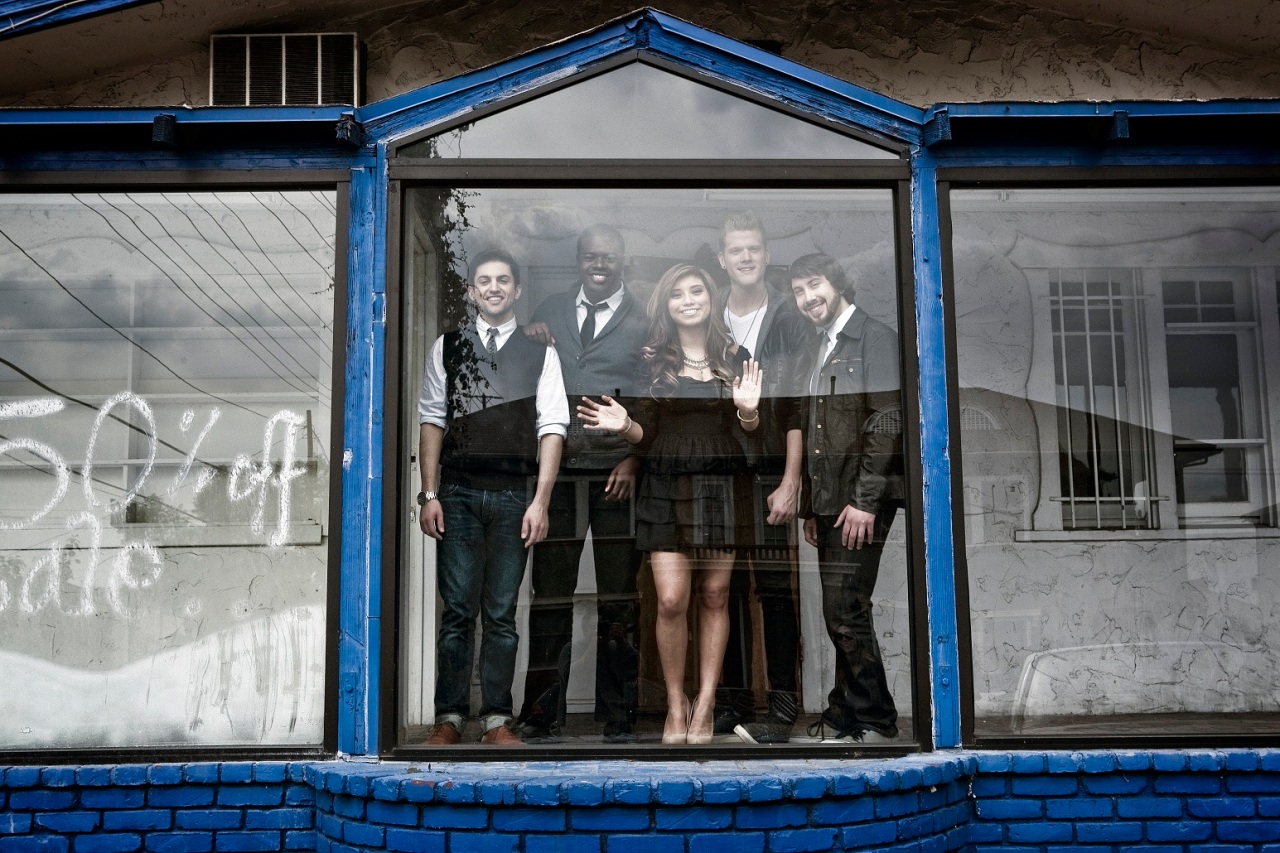 On June 26, Pentatonix released PTX Volume 1 and are now prepping for upcoming live performances.  In our interview we talk to Scott Hoying and Avi Kaplan.

Q.     What do you think set you apart from the other groups on The Sing-Off?

Scott:    I think what set us apart is that we were constantly trying to change the song almost 100%, a total creative risk, every week. Sometimes it didn’t pay off, but most of the time it did pay off. And I think that that really propelled us to the end of the show. Also I think it helped that we only had 5 people and …our rhythm section was one of a kind – we had Avi and Kevin doing bass and beat boxing, and their style of beat boxing and bass was very different from everybody else and that gave our group a unique cool sound. So I think that’s what did it.

Avi:        I think another thing is that we formed right before the show started. … Everything was like a business. When we got to rehearsal, there were no hard feelings, asking one another, “what’s wrong,” or “what’s going on.” It was run well with no emotions, so no one ever got hurt feelings or anything. It was really like a well-oiled machine once we got it started.

Q.     What was going through your mind the moment they crowned you the winner?

Scott:    It was kind of like a blackout experience. I remember waiting for them to say our name, because we were freaking out, but once it happened, there was so much excitement and so much adrenalin and so much release that it’s almost blurry to me.

Avi:        Yeah, I think for me I really do remember it vividly. Right before, everyone was shaking and really, really worried, and I had my head down, my eyes closed. And right when they said it, it was like this relief and a literal explosion because everybody was – even the Aires — they were so happy for us and so proud of us. And it was really one of the most amazing feelings I’ve ever felt in my life. I think I can speak for everybody that it was the same for them.

Q.     So how hard is it to focus when you’re harmonizing or when you’re beat boxing and there’s other people singing different parts?

Scott:    It’s definitely difficult. It was at first. It’s just very hard to trust to be one of the parts because that means that we all have to be in tune for it to work, and if one person messes up or one person drops out, it all falls apart because we only have 5 parts. But I feel like since we’ve done it so much this past year, we’ve gotten so used to it, that it’s a lot easier for us. But it definitely started out difficult because it was so new and different.

Avi:        I totally agree with Scott.  I think it’s a really interesting thing because it just involves so much trust, that in order to not concentrate on every single part, that means you have to trust everybody so much that they’re going to do exactly what they’re supposed to be doing, and that it’s all gonna fall together, and be what it’s supposed to be. So it involves a lot of trust, but now that I’ve been in the group for – almost a year… almost a year we’ve been together so it’s really amazing that we can totally trust each other and go on stage and know that we’re gonna do it right.

Q.     During the competition was there one song in particular that was more difficult than the others to get down?

Scott:    Personally, it was different each time, but as a group I feel like we struggled with our Britney Spears medley. That was the first week where we were, like, what do we do? We didn’t know how to change the songs. We didn’t know what to do with it. And the notes were hard to figure out.

Avi:        Yeah, and just picking each key for each song, and having cool transitions. It was literally 3 times as hard because there were 3 different songs put into one song. So that was tough. I think for me, Born to Be Wild was my toughest song because it was really hard to do choreography and the bass line was really fast.

Scott:    The hardest for me was Dog Days. Because the whole week we were doing Dog Days I didn’t have a voice so I never got to sing the arrangement full out. And also it was very high for me and it was constantly in my higher belty range, so it was not a good combination with the fact that I was really sick that week and had no voice.  That was the biggest struggle for me.

Q.     How was it opening for Cee-Lo Green and then performing with Chris Brown at the NBA All-Star game this year?

Scott :   It was one of the most insane experiences ever. Cee-Lo Green was a really, really cool guy, super nice. And it was so wild opening for him because I remember loving his music last year and the year before, and I’ve always been a big fan of him. Avi is a big fan of him too I think. So it was so weird to say “we’re opening for him.” It’s just one of those things you never think can actually happen. So it was kind of a trip. And then the NBA All-Star game was even more so a trip because those are some of my favorite artists. Lil Wayne, Drake, Chris Brown, Nicki Minaj, Ne-yo, Mary J. Blige. It was just all these huge, huge artists sitting in the front row while we got to stand up and sing. We dedicated “Let’s Get it On” to Nicki Minaj and they all stood up and danced and were singing along. And Ne-yo came up to us and told us we did a great job. And Nicki Minaj thanked us for singing to her. It was one of those things where you pinch yourself because you’re like, there’s no way this can be real.

Q.     That’s awesome. Are you all originally from Texas? How are you liking Los Angeles?

Avi:        No I’m originally from Central California. The trio Scott, Kristy and Mitch are all from Arlington, Texas. They all kind of grew up together.  And Kevin’s from Kentucky. We love Los Angeles. We honestly really do love it.

Scott:    It’s so funny when people are like, “It’s such a beautiful day today.” I’m like, “Well it’s a beautiful day every day.” It’s not a very good conversation starter. (Laughs.) We love it. It’s a fast paced city, there’s nowhere to park, a lot of people, and it’s easy to get lost. But it’s a lot of fun and it’s awesome and it’s adventurous. We’re having the time of our lives. 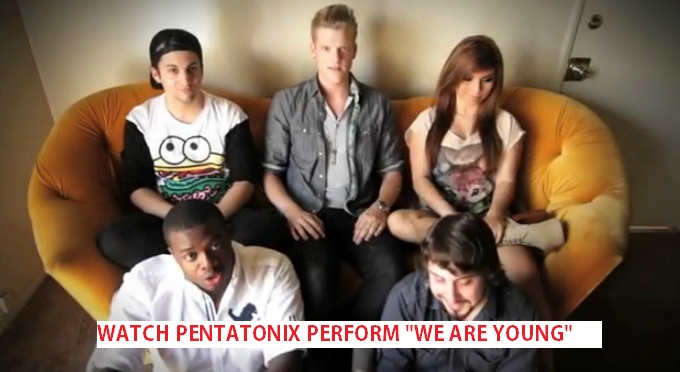 Q.     What advice would you give anyone trying out for a singing competition?

Scott:    The advice I would give is, for your audition, really put some time into it, find the right song that you know they’re gonna be looking for, make sure it’s really good, make sure it’s really creative, and then go in there and kill it. And be very prepared.  I feel like people are like, “Oh I want to go try out for American Idol, or I want to go try out for the Sing Off.” And they just go and audition with a song they like or something. But there’s a lot of work and strategy that goes into auditioning.

Q.     What songs would you like to cover in the future that you haven’t already?

Avi:        Yeah I would like to cover Mumford and Sons, Bon Iver, that kind of stuff. But it’s funny because really no matter what we do, no matter what artist or what genre, it really ends up being in Pentatonix style. That’s what I really love about it.

For more information go to PTXofficial.com