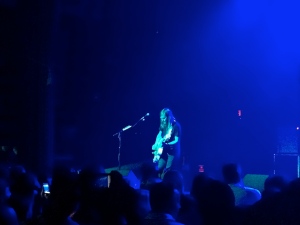 The UK band struck a chord with the all-ages crowd destroying the stereotype that people in LA don’t dance but merely stand with their arms folded, judging and plotting how they could have done it better. No, not this time.

[Story and photos by Franceasca Seiden]

“Now that’s what I call Rock n’ Roll!” I leaned over yelling into my friend’s ear during Band of Skull’s first song of the night “Sweet Sour.” The ballsy bluesy trio that is Band of Skulls killed it at LA’s Fonda Theater, Wednesday night with an explosive ninety minute set. KCRW, (LA’s go-to source for indie music) presented the show along with Goldenvoice and yours truly won two tickets from media sponsor Filter magazine.  “I think this will be the last time we’ll see the band in a such a small space,” I said as we exited the theater.

Somewhere in between “Wanderluster” and “Bombs” my friend whispered in my ear, “This is the kind of the music that makes me want to get a tattoo!” And she was right… oh yes the UK band struck a chord with the all-ages crowd destroying the stereotype that people in LA don’t dance but merely stand with their arms folded judging and plotting how they could have done it better. No, not this time, LA pessimists. This audience was as pumped as the pit at a Soundgarden show circa 1992.

Band of Skulls frontman, Russel Marsden, encouraged crowd participation gesturing in between chords as empowered fists beat the air to the atmospheric vibrations, head banging (although BOS is not a heavy metal band) spontaneously broke out, phones snapping and recording while a few flickering lighters attempted to spawn the reinvention of the now extinct ritual of lighting fire to show appreciation to the beloved rock gods and goddesses. Reverb from Marsden’s multitude of guitars and Richardson’s bass vibrated the floor underneath my feet in between Hayward’s heavy handed drum beats all the way to the end of their set including “Light of the Morning”, “Death by Diamonds and Pearls” and two encore hits “The Devil Takes Care of His Own” and “Impossible” solidifying that this indeed was a good old fashioned rock n’ roll show. 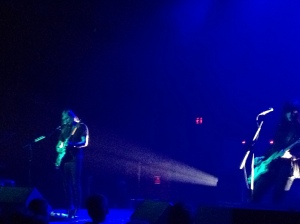 Band of Skulls released their second album Sweet Sour in February 2012 after their hugely successful debut Baby Darling Doll Face Honey in 2009. The UK trio made up of Russel Marsden (guitar & vocals) Emma Richardson (bass & vocals) and Matt Hayward (drums) was originally called Fleeing New York and worked with producer Ian Davenport (Badly Drawn Boy).  With the success of bands likes The Black Keys, The Kills and their hit “Friends” on the soundtrack for Twilight, Band of Skulls is reaching a broad audience in a small amount of time and to that I say…God Save the Queen and long live Rock n’ Roll!