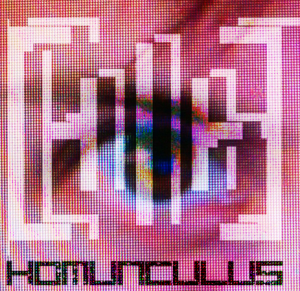 “Your mind will have a hard time grasping what you should be thinking or feeling.”

Produced by Taylor Shechet (known as tlr), and released by Naboamusic,  Homunculus is an experiment in sound effects, mostly hyper and/or cold and dark.

The Intro to the EP pretty much sets the tone as to what you can expect from the rest of the album –a chaotic splatter of sounds and undetectable words. Not that the album is unpleasant, but if music in general has a way of influencing your moods and thoughts and, as has been scientfically found, your heart rate, Homunculus doesn’t allow your mind, thoughts or heart beat to settle on any one idea.

Most of the songs seem to be named for the sound effect they can be utilized for:  ‘Magic Powers’ – for example, sounds exactly like what it’s name implies — magical sound effects for a sci fi film featuring robots, or perhaps the backdrop to a 1980’s video game. ‘Gzngztrzm’ – a word without vowels, just as this song is without a chorus; an erratic explosion of sounds with an underlying pleasant beat. Yet not as hyper-ADD as ‘Blisster.’ Our favorite is the final single, ‘Crystalline Space Entity,’ which has some tender moments.

Tlr doesn’t come off as an amateur. He clearly knows what he is doing and knows how to manipulate sounds, and possibly your mind. I am not sure where to place this EP, or for what occasion one would play it, but that seems to be the intended result. Bottom line, once you push “play,” your mind will have a hard time grasping what you should be thinking or feeling, and you may even find yourself exclaiming, “What the F did I just listen to.” Somehow, I get the impression that is tlr’s clever intention.