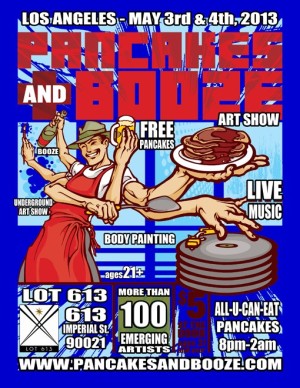 This weekend: The Pancakes and Booze Art Show  (May 3 and 4) offers something different for the L.A. art community: pancakes, for one. And we’re not talking about breakfast. The show starts at 8:00 pm so come with an empty belly. In its fourth year, the fest will feature, among art submissions from some of the best upcoming talent, a live stencil art performance, a live art battle and body painting. AND music by Ghost Parade (May 4), a “heavy jazz/pop/rock” kind of band from San Francisco. Their album, released digitally March 1, features delirious guitars over pounding drums. Think Adelita’s Way. Download their album and see them live at the Pancakes and Booze Festival this weekend. (Tix only $5). 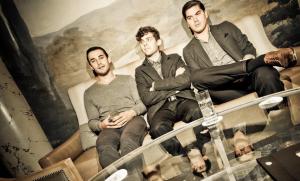 On May 4 hang out at Universal Bar and Grill and watch Decoded perform in full Star Wars garb and perform Star Wars favorites as well as the band’s original music. Something different for a late night! In case you haven’t heard, the L.A. music scene has ruptured and birthed this quintet of four talented rock goddesses (Heather Miller, Angela Grant, Tevis Aubrey, Amanda Gunnels) fronted by one dynamic dude (Derek Jordan).  Join the band on May 4 and wear your favorite Star Wars outfit (in celebration of the 30th anny of Star Wars: Return of the Jedi, of course!)

Listen to DECODED: “If You Want To Be Sexier”

PYYRAMIDS (feat. Tim Nordwind of OK Go and Drea Smith). Ahh the wonders of the internet. The talented duo met via a mutual friend, and began communicating across the miles by email, sending beats and lyrics back and forth. Months later, they finally met in person in Los Angeles and finalized the music, laying it all down on a 10 inch vinyl. See Pyyramids tonight live at The Satellite.