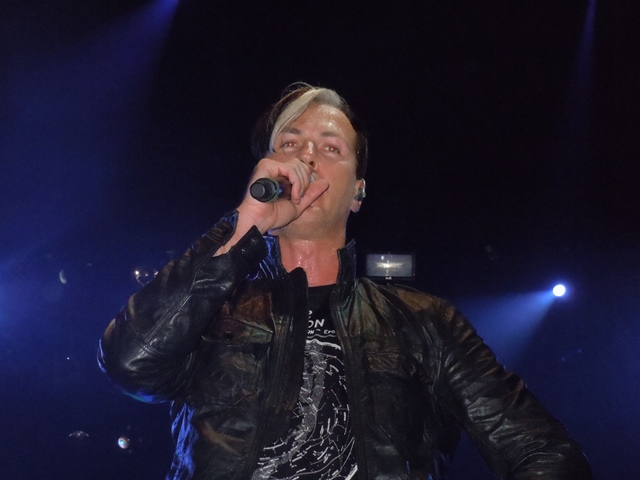 [Story and Photos by Jaclyn Gonzales]

Dancing, vitality and great entertainment is what you experience when seeing a great live performance, so it is no surprise that Fitz and the Tantrums provided an exciting high energy hour and a half concert this past Saturday, July 27th in their Los Angeles home show at the Wiltern. ​

An electrifying surge of energy radiated when the band took to the stage. Lead Singer, “Fitz” Michael Fitzpatrick, takes center stage, his vocal counterpart Noelle Scaggs, the only female and also fashionista of the band, dances and walks to her microphone. John Wickes on drums, Jeremy Ruzumna on keyboards, and James King on Saxophone take to their spots. Center stage displays a logo for the band, which is a large neonheart that slowly illuminates into pink from the bottom reaching to the top, which raises the anticipation for the band to beginplaying. When the heart is complete and glows neon pink, the band powers into their set and is off and running, providing a night of steady stream of high energy and a fantastic live showas always.

While it is no easy feat to play live shows flawlessly, this five person neo-soul/indie pop band exude a vibe that is captivating, trendy and spot on while showcasing each of their talents solo and collaboratively and commitment to put on a great show. The duo singers, Fitz and Noelle, charge up the audience, pump them up and perform with meaning for each song. Strutting, dancing and keeping the groove, they performed single, “Out of My League,” which is currently gaining them popularity with frequent rotation of radio airplay, “Don’t Gotta Work It Out” and their hit single “Moneygrabber,” Along with a handful from their latest album. Saxophonist James King consistently impresses as the instrumental backbone to their music style and provides back up support with the various instruments he plays for the songs.

This band knows how to party, getting everyone on their feet, dancing and moving to their beats. Those who are familiar with them know that Fitz and Noelle will call you out in the audience if you are not participating, not dancing or just sitting. Their quick tempo, bouncy rhythms and 60’s and 80’s era inspired songs make it hard to stand still, especially with their rendition of The Raconteurs, “Steady As She Goes” and the Eurythmics cover, “Sweet Dreams (Are Made of This) whichare staples during their concerts.

While they had two opening bands, Parade of Lights andThe Colourist, each were great entertainment to kick start the night, but the audience was into and cheering for The Colouristfor their Of Monsters and Men style vocals and performance andhollered with support for the female drummer and vocalist, Maya Tuttle, who lead the set with pounding and rhythmic drumbeats.

Noelle and Fitz’s vocals are strong, instruments spot on,and the energy through the roof, all that provided a great Saturday night in L.A. Fitz and The Tantrums encompass what a Los Angeles based band should exude; they are hip, have style, have passion for the music and most importantly put on fantasticlive shows.