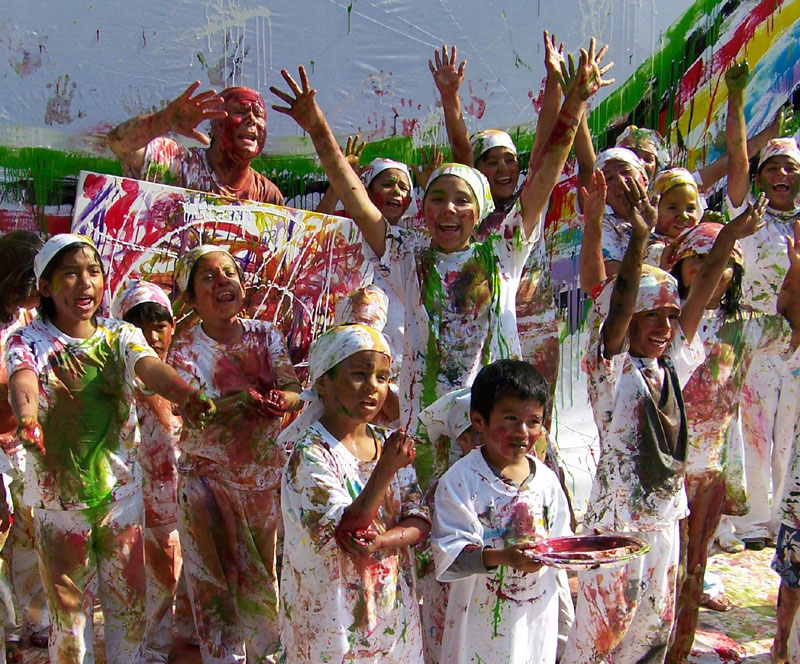 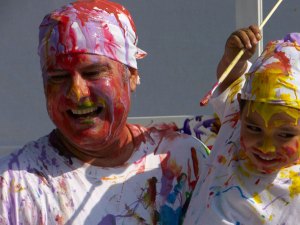 METIN BEREKETLI, HEALING PAINTER AT “LOVE IN ACTION” CHAPALA, MEXICO Written by Michael Kyne I have just come back from a children’s shelter in Chapala, Mexico a small village close to Gaudalaja next to a spectacular lake. I was there to assist Metin Bereketli work his magic and charm with his “Healing Art” program. We were at the Love in Action children’s shelter, a home for abandoned and abused children that were from four months to eighteen years of age. The shelter can be seen at www.loveinactioncenter.org Metin is an international artist with whom I had the pleasure of an extensive interview with him before making the trip. You can see his art and his work with charities at WWW.HOLLYWOODPAINTER.COM The idea of his show is to lift up the children’s spirit, even for a little while, out of whatever unhappiness is in their lives at that moment. To give them the chance, with, Metin’s help, to experience the exuberant immersion into color. Maybe to take the first hesitant step into the world of art. The children in the shelter are either abandoned, abused, orphaned and in one horrific case of a sweet, sweet girl whose father held her hands on a stove top until the skin was charred and blackened. These were the children that Metin went to help heal their wounds both mental and physical with his special brand of kindness. The show starts with the backdrop of white cloth with flooring the same. Metin comes on stage dressed head to foot in white. White bandana, shirt and pants. He announces in his booming, European /American accented voice that he is going to introduce new painters to the assembled crowd. Then about thirty children file onto stage from small to tall all dressed exactly like Metin, white bandanas, shirts and pants. A more sweet and innocent group you cannot imagine, I freely admit that along with many others I had moist eyes. With a beautiful young girl as his translator Metin gets all the children lined up to his left and right with him in the center. With their white outfits and white backdrop all that shone out from the stage, was a row of bright shining faces with looks of excitement, trepidation and maybe a little fear as they had no idea what was about to happen.

A perfect picture of purity, love and goodwill!

With a loud voice Metin announces as all the kids shoot their arms in the air “Ladies and gentlemen….PAINTERS” Then, after a big bow, the children sit in a semi circle facing Metin. Metin picks a child hands him a painters pallet with colored paints and a brush and leads him to an artist easle center stage. There is already a large canvas there with the beginnings of a painting of a large circle representing the circle of life. Metin invites the little one to paint whatever he likes on the canvas. At this point the crowd begins to laugh because unbeknownst to the child Metin is pouring different colored paint on the boy’s head and putting handprints on his back. Of course all the kids think this is hilarious and join in the laughter. Metin then dips his fingers in the paint and gently paints the little kids face. At this point Metin invites the boy to paint his face and while its being done Metin pours different colors on his own head. This brings shouts and laughter from everyone particularly the children, because they now get it, they have been given permission to jump into the figurative mud puddle. When the first victim finished he is held aloft as Metin yells out with the boy “ladies and gentlemen…. I AM A PAINTER” with everyone yelling and cheering like mad, much to wildly smiling child’s delight. This process went on child after child with everyone getting more and more enthusiastic and the children getting more and more excited waiting for their turn. By this time the kids were painting each other and dumping paint everywhere. One particular young girl was persuaded to come on stage. She had difficulty to overcome shyness. When she had first come to the shelter her foot was completely bent to one side making walking next to impossible. The shelter got her multiple operations until she finally found the joy of getting around her self although with a little difficulty. With all the excitement she had a problem standing, without fuss Metin gently put his big arm around her so that she, like all the other children could express her feelings in color. 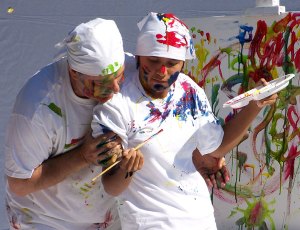 Metin brought HOPE and LOVE to many children in Mexico with his good heart and boundless energy!

When the canvas was completely covered with every child’s efforts in art, most for the first time, the finished piece was put to one side. With all the children once again sitting in a paint splattered circle, Metin egged them on by liberally spraying them with multi-colored jets of paint. Every kid were now enthusiastically painting each other and even themselves. The next step was to have everyone paint the white background with anything they wanted. It was interesting to note how each child put color to feelings, some dark some joyful and some even destructive, smudging others work. One happily smiling girl wrote “I LOVE YOU” in impressively large letters. Finally Metin finished the piece with his traditional rainbow from one side of the stage to the other, completing a communal work of art eight feet high by twenty feet long. Being a showman to the last, Metin then laid on the ground and the kids attacked him like brightly colored vampires shrieking with delight as they deluged him with paint from head to foot. Eventually Metin emerged from the pile of children looking like a slowly melting, multi colored candle. 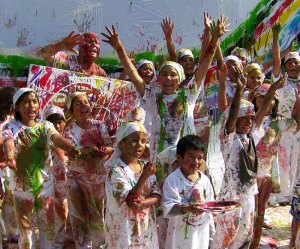 Finally all the children once shining white, were once again lined up in front of their masterpiece themselves dripping in color to in fact becoming themselves living art. With a final bow and “VIVA MEXICO”, “LA VIDA ES FANTASTICA” they threw their arms and pallets in the air, graduating from Metin’s Healing Art Program, Chapala, Mexico.

Written by Michael Kyne
Michael Kyne is a British / American writer and photographer. Those interested in supporting the work of Amor en Accion / Love in Action shelter in Chapala, Jalisco, Mexico may visit www.loveinaction.org