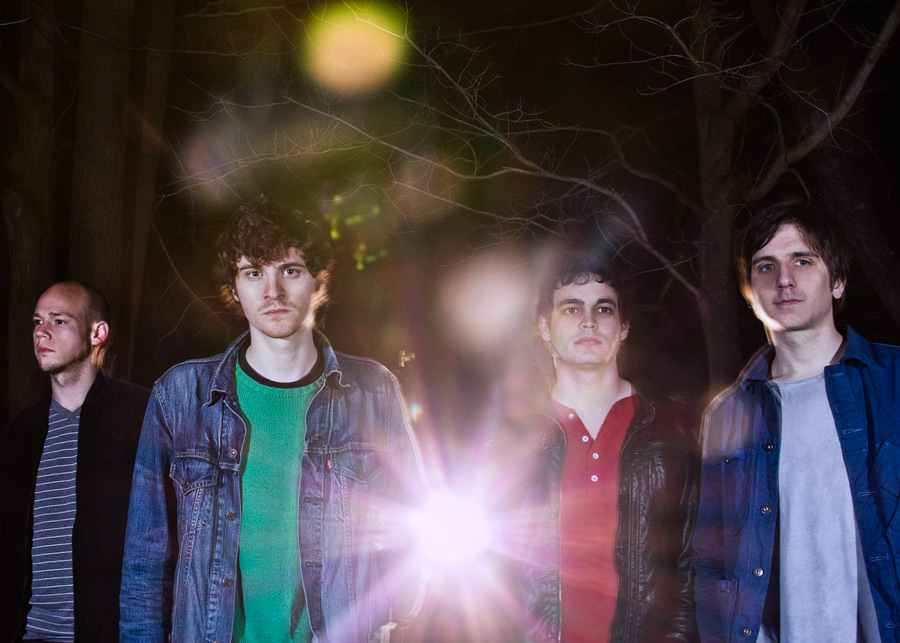 We talk on the phone with Emile Mosseri of The Dig.  The New York group will release their second album Midnight Flowers on May 29, 2012.  I would compare their music to The Strokes, Vampire Weekend or Arctic Monkeys. The group has toured with The Editors, Portugal Man, and most recently with Ben Kweller and Sleeper Agents.  Their powerful guitar, bass, and heartfelt lyrics make for riveting live performances and compelling recordings that you will want to put on repeat. I’m convinced The Dig is the next “big thing.”

Q. How did you meet the other members of the band and create The Dig?

Emile:   Well, David and myself grew up together, playing in bands since we were 10 years old, in New York about an hour away from the city, and we met Erick when we were 15. We’d been playing in different bands for years and years. We moved to New York. And we’ve been playing with Mark, who’s our drummer now, for about 6 months.

Emile:   Oh yeah, absolutely. It was a lot of fun.

Q.         I noticed that [now] sometimes you sing, and sometimes David sings. Who chooses who is going to sing?

Q.         I read that LAST.FM has said you “put out the best album of the year.” How does that statement make you feel?

Emile:   That’s great. Anything like that’s always great to hear. We did a session with them. We came in and they had a pretty cool setup. It was cool. Anything about the music, it’s always nice to hear that.

Q.         You have toured with a lot of great bands, including The Editors, and Thrice, to name a few, and you just completed a tour with Ben Kweller and Sleeper Agents.

Emile:   Well, two nights ago, the most recent thing that comes to mind — do you mean this tour or in general?

Emile:   Oh in general. Hold on, there’s a lot. Where do we start is the question. Which one do we chose? One time we were on tour with Portugal Man and it was the last night of the tour. Everybody gets on stage, the very last night of the tour, and everyone’s playing our last tune. And the sound guy for Portugal Man did a back flip off the stage and landed on his chin. It split it open. He had to go the emergency room. That was an unusual one. Also, a few nights ago, we were at the McDonald’s parking lot at the drive thru, and we were ordering food and our car started to smoke and leak coolant, so we had to push it into the WalMart parking lot, get it fixed. Almost didn’t make the last gig of the tour on time. That was kind of a drag. But we made it in time, and it all ended well.

Emile:   Sure. David had the lyric for a while, the “red rose in the cold winter ground,” he had it in another song and we kicked it around, but it started with the lyric. It’s a symbol for finding something great in a bleak situation. It’s kind of like a love song of sorts. He had the lyric and then Erick had a riff for another song, and it kind of fell into place when we combined the two. But that’s sort of what it is. Just a song about somebody finding somebody, a symbol for that.

Emile:   Penitentiary we wrote a long time ago, Eric brought it in. It’s a story we made up.

Emile:   I would say don’t ever take any girls who you meet at the show backstage to meet the headlining band. Because they won’t be interested in you anymore.

Emile:   Both, I’d say. It works both ways. Like any good advice.

One thought on “THE DIG: Quite possibly the next big thing in music”