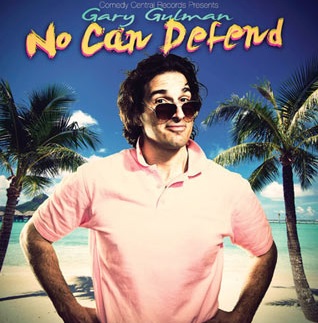 Stand up comedian Gary Gulman has tackled many topics on stage. In our interview, Gulman opens up about a more personal subject – himself.

Gary:   It’s something I recorded in New York City in October, and I spent a few months editing it, and then I guess they decided to release it last Tuesday… I’m very happy with it. It took me a long time to put out a new album. My last album — well, the first album was in 2005 — and then I put out one in 2008 but it was all Christmas and Hanukkah jokes. It was a holiday album. So I probably recorded 10-15 shows over the years trying to get the right one, and finally I got a couple of shows that worked this year. So it came out good.

Gary:   Yeah, they are from live shows. Most of it came from one show, and then a couple of jokes were brought in from another show. But it’s interesting how you listen to this stuff and then you find that it makes you cringe over the years of listening to so many recordings. I’m just like, nah, I can do better. I wish somebody hadn’t dropped a drink or that the ice machine hadn’t gone on at that point. So it’s harder than you think it’s going to be.  It requires a lot of patience and good timing.

Gary:   Yeah, I live in New York City. I’ve lived in New York since 2006. Although I lived across the river in Jersey for about a year at one point, but it was just over the bridge. I’ve lived in this area for 6 years. And I lived in Los Angeles from 2000-2006.  And before that Boston.

Q.        How do the comedy clubs in New York City differ from those in Los Angeles?  Any difference?

Gary:   Oh yeah. I mean, even if you’re doing really well – at my most popular in Los Angeles I would do maybe 5 shows in a week. But [here] Saturday night I did 5 shows in the city. Friday night I did 3 shows. Some nights I do 5 or 6 shows. The audiences are fuller. This one club that I work called the Comedy Cellar in the West Village, they do 2 shows Sunday through Wednesday, and 3 Thursday, 4 on Friday, and 4 on Saturday. So there are so many opportunities to get on stage here. And I really feel like it’s improved my act and made me more prolific as far as being able to try out new things and really hone the material.

Q.        Is there any subject that you absolutely will not talk about on stage?

Gary:   I would talk about any subject but I wouldn’t make light about the holocaust or AIDS, or rape. I guess I could mention them. I know that I have. But I would never make light of those subjects. Maybe ironically I’ve touched on racism or things like that, in a light manner, but those are some subject that make me uncomfortable, and make audiences uncomfortable. There are people who tackle it quite interestingly, but I don’t know if [audiences] buy it from me. Language – I don’t mind saying swears and things like that, but again, people don’t buy it from me if I get too vulgar. It’s good and bad. People think I’m nice so they don’t really buy me being angry and swearing and everything.

Q.        Have there been any unusual things that have happened while you’ve been on the road?

Gary:   Yes, one time I left a pair of sneakers on the top of my car and I drove off, and I guess they must have fallen. And somebody who was at the show followed me 75 minutes from Providence, Rhode Island to the North Shore of Massachusetts to return the shoes and I said “Why didn’t you at some point honk at me or flash your lights to get me to pull over?” And they said “we didn’t want to scare you.” And I was like, what’s more scary? For someone to pull up at your house who followed you for an hour and a half. That was the strangest thing. And they had to go to the bathroom so I invited them into my place – I was staying at my mom’s at the time – and so I invited them in. So that was very strange. They went to the bathroom and then I guess drove another hour and a half home at, like, 3:00 in the morning. It may have even been New Year’s Day. But they spent most of their night returning shoes to me. That was probably the weirdest thing. They were nice I guess. It was funny they thought following me would be less scary than blinking their high beams and honking at me. I guess it was very thoughtful of them to return my shoes, but it was weird the way they did it.

Gary:   Yeah. I think that as men get older they get more and more particular about who they would marry because you get very used to your lifestyle and the preferences. I’ve been burned a couple of times in relationships and I’m rather reluctant and cynical to get into anything too heavy, but I occasionally fall for somebody, but it’s rare.

Q.        Have you considered getting into acting and movies?

Gary:   I’ve auditioned a lot and I’ve done a lot of training and classes, and small things, short films and plays, and stuff like that, but the only reason I ever wanted to get into sitcoms – and I’ve made pilots – but the only reason was so I could do more standup comedy. And the current state of standup comedy with the internet and Comedy Central and satellite radio comedy stations, and things like that, is its actually possible to make a mark as a comedian without having the sitcom or movie exposure. It’s harder, and it takes a longer time, and it’s not quite as “overnight,” but I really feel by applying myself completely to comedy and being driven in that way, that I have no doubt that eventually I’ll be able to get exactly what I want as far as a fan following without getting sidetracked with movies and television. With that being said, if somebody offered me something, I would jump at the chance. It’s just for every audition you go on, it’s hard to take the rejection after a while, and preparing for the audition, and keeping your acting chops sharp requires attention and dedication that I’d just rather put into writing jokes and performing at night. So that’s where my focus is now. I don’t think its sour grapes. It’s doing what I want, rather than what I think would be a more difficult route.

Q.        What made you take the plunge into standup comedy?

Gary:   I think part of it was I had a talent, an interest and a passion for it. But I think if I had been happy in my job as an accountant, I would have maybe stuck with that, because it’s a long road to go on, and there’s not a lot of security initially. So I think the fact I hated my job and just could not rationalize the work that I was doing as having any kind of ethical manifestation. My brother is a tax guy, and the way I look at it, it’s like he’s spending his life saving money for rich people. So I think making strangers laugh, at least having a creative component to your profession, is more manageable for me. I can live with that a lot easier. I’m paraphrasing, but Frederich Nietzsche was saying you can handle any “how,” if you can figure out a “why.” The “why” with comedy, I use my creativity and also it’s very exhilarating to perform in front of a crowd that really gets you and enjoys you, and pays attention to you. It’s hard to go back to accounting after experiencing that.