“As a first timer, one of the biggest lessons I learned was to go with the flow.”

[Story and photos by Rachel McFarland]

Each year in March, thousands of music fans and industry insiders flock to Austin, TX for South by Southwest (SXSW)- a music conference that occurred this year from March 12-17th.  SXSW has become synonymous with being a place where unknowns get discovered, and big names play to small, intimate crowds.

Every genre of music is represented- its this sheer abundance and variety that makes SXSW so special.  Past alumni include bands like Alabama Shakes, The Black Keys, Bon Iver, fun., The Killers, Mumford & Sons, Muse; and artists such as Tori Amos, Eminem,  and John Mayer.  This year’s variety included over 2,000 artists that spanned every genre, including LA bands like The Airborne Toxic Event, Cold War Kids, Dawes, Rhye, Wavves, Gliss, and Haim- not to mention big name drop-ins by the likes of Justin Timberlake and Prince.

So what’s a music fan to do?  While the events at the convention center (panels, artist interviews, sessions etc) are geared towards music industry folk, anyone can buy a badge.  A badge is not cheap, but it gets you access to panels (50 Years of the Beatles, anyone?), plus interviews (like Depeche Mode, Stevie Nicks, Clive Davis and more), and the keynote address, this year given by Dave Grohl. A badge also allows for priority access at some of the music venues.  In many cases, this can be the difference between seeing the band you flew down to see…or not.  If you don’t care about seeing panels on The Beatles (in which case, I am glad we’re not friends), and you don’t want to shell out the big bucks, you can also purchase a wristband.  Wristbands also get you access to shows, but usually after badge priority and only if the venue is not at capacity.  As with everything, even SXSW has a hierarchy.

During the week over 80 small venues play home to shows, allowing you to see your favorite artists up close. Austin is a musical city, but during SXSW every nook and cranny is turned into an outlet for music, from the local bars to the local Patagonia store (I kid you not). So how does one find their way around?

There’s an app for that, of course.

Many attendees take the time to go through the schedule and map out their week.  The SXSW app allows you to view exactly what’s going on each day and add it to your own personal schedule.  One more click integrates with your iPhone’s map to give you directions, making it easy to get around (but not easy to keep your cell phone charged – bringing an external battery pack helps).

As a first timer, one of the biggest lessons I learned was to go with the flow.  I had bands that I really wanted to see, but by allowing for fluidity I was exposed to more music.  Instead of adhering rigidly to a schedule, I saw bands I normally would not have seen.  For example, one evening I ventured over to Mohawk, a venue with both indoor and outdoor performance spaces.  I went there to see Night Beds, a folky, indie-pop outfit, and ended up seeing the otherworldly, ethereal Torres.  Heading outdoors, I was able to catch a lineup that included Cloud Nothings, Diiv, and Local Natives.

SXSW isn’t just a nighttime playground, however.  Throughout the day there are showcases at venues all over town.  My favorite daytime showcase quickly became the StubHub sponsored party at Old School Bar & Grill on 6th Street.  Here I was able to see Michael Kiwanuka, a folky singer-songwriter, highlight his beautiful vocals with songs off his album Home Again.  The StubHub showcase was also where I caught my favorite performance of the week – The Airborne Toxic Event.   Although it was a 3pm performance, they rallied the crowd with so much energy that it felt like 3am.  Temps were in the mid-80’s in Austin that day and by the end of their set, the entire crowd and band was euphoric and sweaty.   After this, I headed to the Spinner showcase at The Moody Theatre for a lineup made in folk pop heaven with Family of The Year, Lord Huron, Natalie Maines with Ben Harper, Iron & Wine, and LA band Dawes.  Being in a small theatre up close for each of these made for a live music experience not possible on tour stops through LA. 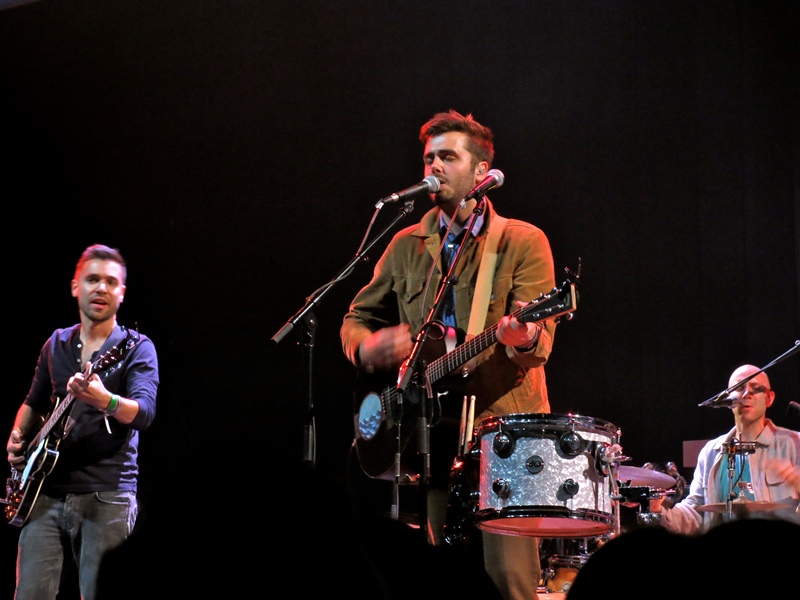 The proximity to the music is the main thing that makes SXSW so unique and so worth the trip.  In one night there’s the opportunity to see bands like Solid Gold, Small Black, and Phosphorescent – all within 20-30 feet of the stage.  In short, SXSW is a music lover’s paradise.  Overwhelming at first with the sheer choice of amazing artists to see, its easy to get into a groove and be open to experiencing new music as well as making it to the must-sees on your list.  If going to SXSW has been something on your bucket list, start planning for next year now.  It’s worth the trip. ~