[Story and Photos by Rachel McFarland]

The Echo is one of LA’s great small sized music venues, allowing artists to play to an intimate crowd on a small stage under the swirling lights from a disco ball. Orchestral indie band Mother Falcon recently played at The Echo to a small crowd in a very intimate show – especially for the band members. Thirteen band members crowded onto the stage at The Echo on Tuesday night, cramming themselves and their instruments onto a stage that could barely hold them all. When you’ve got a string section, a horn section, drums, keys, guitars and an accordion, things can get pretty tight. And with all of those instruments, things can get pretty loud, too.

Mother Falcon is a band made up of orchestral instruments, playing music that has an orchestral base but is also a bit folk, a bit alternative, a bit melodic, and a lot of unique. Their current and third album, “You Knew,” is full of varying dynamics that the band translated seamlessly on stage with tight control. Playing “Sleep,” for example, the band easily controlled the variations in tempo, quietness and loudness by wordlessly communicating to each other with their eyes. It became clear quickly that each person on stage is immensely talented, and also multi instrumented, frequently rotating instruments from cello to guitar to keys with ease. Playing songs in their first set such as “My Majesty of Madness” and “I Dream of Water” the band quickly established what kind of show this was going to be. 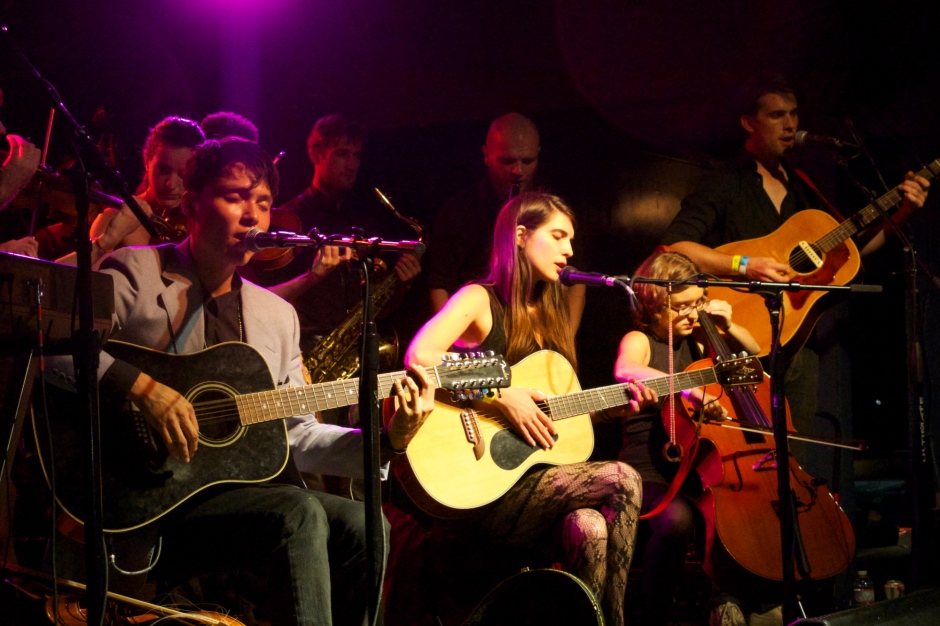 Mother Falcon has received accolades for their live show, having performed successful stints at this year’s SXSW, and it’s not hard to see why. Their first set was a frenzied performance on songs like “Dirty Summer,” with band members earnestly singing with eyes closed, dancing on chairs, stomping, and frantic instrument playing which created a wall of movement on the stage. Their excited playing on such a crammed stage leaves one to wonder how elbows and instruments aren’t constantly being knocked into each other, but even this control of dynamics seemed to be as carefully orchestrated as the music itself, ensuring no such collisions occurred.

At the end of their first set, the band stated they’d be back after a short break to play Radiohead’s “OK Computer” in its entirety. A mumble went through the audience, who couldn’t quite tell if they were kidding or not. They weren’t kidding – their second set was entirely comprised of “OK Computer” from start to finish, showing a completely different side of the seminal electronic rock album with horns and cellos. Once they finished and said goodnight, they decided to play one more tune at the behest of an eager audience member who really, really wanted to hear “Fireflies,” off their 2011 album “Alhambra,” another tune with intense dynamics. It was the perfect ending, allowing the band to finish the show as raucously as they started it. ~