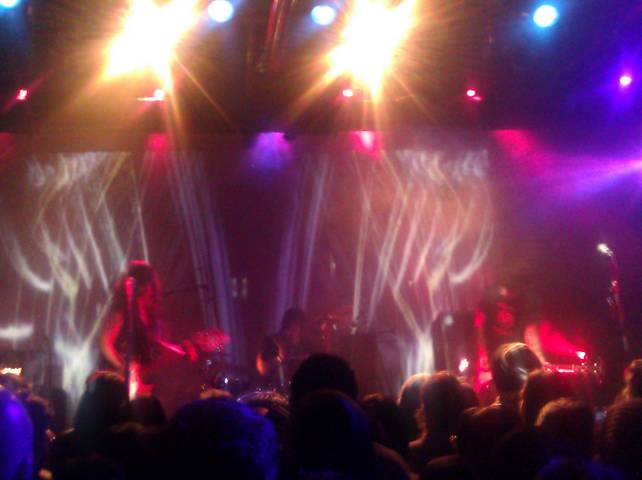 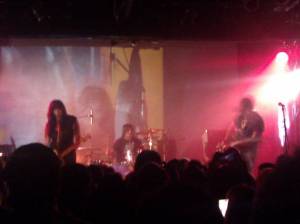 I have the utmost sympathy for Girl in a Coma. Ten years into their prolific career, it seems they’d never garner the public adulation that other riot grrrl revivalists (Dum Dum Girls, Warpaint, Best Coast, Vivian Girls) have been getting these last few years…some of the acclaims are well deserved because they’re a collective genius (Wild Flag) while some others got their attention by taking their clothes off (Gossip). Nevertheless, I don’t think Girl in a Coma –composed of 20- and 30-somethings Jenn Alva (bass) and sisters Phanie and Nina Diaz (drums and lead vocals)—are in the music business for the parties or the paycheck. In fact, this is a band known for their hard work ethos — releasing four albums within the last five years while touring the world with the likes of Sia, Tegan & Sara, Morissey, and The Go-Go’s.  Also worth noting that Girl in a Coma is not a straight up punk band with three cords and arcane yelling; instead, this is a punk rock band with an eclectic music range- blending gritty 90s rock with tejano, 50s rockabilly and Tex-Mex.

To be honest, I had pretty low expectations coming into Echoplex to see Girl in a Coma, whose name is a nod to The Smiths’ most notorious song. I mean it’s another punk rock show. Years of experiences have taught me that I typically get bored halfway into the show and I’d ask myself “Is it wrong that I kinda wanna sit in my car and listen to the artist album rather than standing here?” Last night, that wasn’t the case! Despite the less than ideal sound system and overly dimmed lightning, Girl in a Coma played a stimulating brand of throaty, full-blasted southwestern rock, augmented considerably by Nina’s snarling and passionate vocals. Her vocal — a raspy, ferocious, deep growl — is definitely captivating (thought I was hearing the reincarnation of Janis Joplin here). Yeah, I’d have to say that Nina is the crowd magnet. Not only does she possess a tremendous amount of charisma, but also she knows how to cut loose and engage with the crowd (there were lots of “I love Nina” chants from the girl crowd…these girls would have been content to watch her chew gum for 2 hours).  She’s very carefree and not afraid to reveal her inner geek: Her obsession for all things pertaining to Alice in Wonderland & her admiration for Ringo Star.

The band performed tracks mainly from their last two studio albums as well as major singles from earlier LPs. Popular singles like the wonderfully catchy “Smart” and anthemic “Static Mind” were met with loud excitement from the audience, as were fan favorites “Walkin’ after Midnight” (a gritty and seductive rendition of Patsy Cline cover) and “Clumsy Sky.” Even when the band reached more somber ballads, such as the Jeff Buckley-influenced “Mother’s Lullaby” and heavily acoustic “El Monte” (which was greeted with a mellifluous sing-along from the audience…a glassy-eyed moment for me), Nina knew how to lead the audience into a toe-tapping/head bobbing musical reverie, either by involving the audience in sing-alongs or playing a more popular number subsequently after a lesser known song. Nevertheless, there was never a dull moment for me during the show. I’d say “While My Guitar Gently Weeps” is probably the highlight of the night; a beautiful cover of The Beatles that’d not disappoint any Beatles fan out there. Very fast paced with grunged-up guitar while maintaining the purity of Beatles’ melody (If you could mesh up Hole’s sonic guitar sound with George Harrison’s blues guitar jam, this is the perfect result). Other standouts from the “Adventures in Coverland” album included “Si una Vez” (paying homage to the great Selena), which they performed as an encore and the entire crowd felt compelled to shake their butts to the merengue beats.

While it was sad to see the 90-minute set end, Girl in a Coma left a very satisfying impression for everyone there. For the most part, the group performed cohesively (you can see the trusting element uniting these childhood friends), and yet, it is their “never mind the bullocks” attitude and hardworking ethic that put the group above other more mainstream riot grrrl revivalists. For me, this is rock and roll with lots of staying power.

(All photos by Brian Lee) 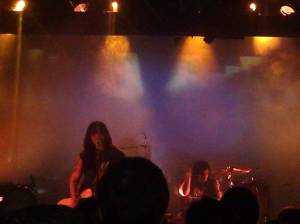 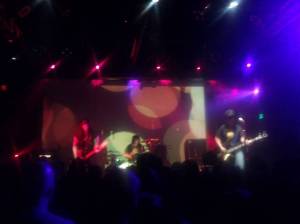 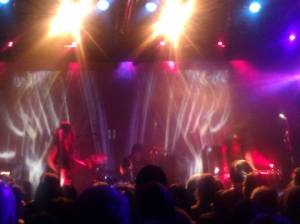 One thought on “Live Review: Girl In a Coma at the Echoplex”