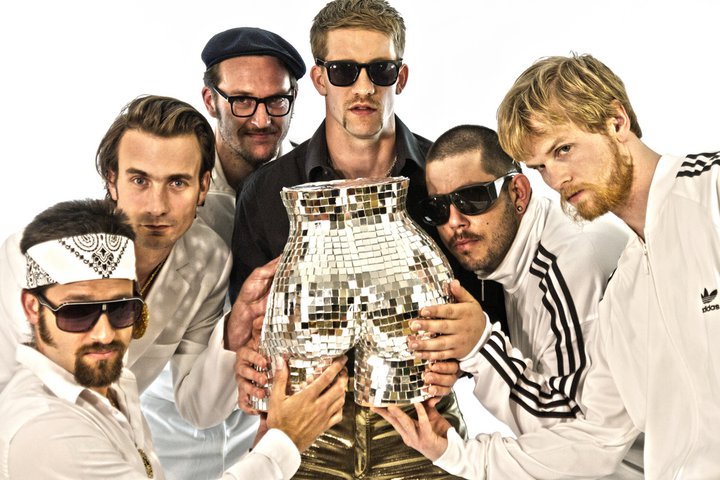 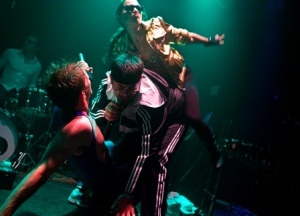 Descending upon Los Angeles at The Mint this past Sunday, the inhabitants of Planet Booty arrived in the form of a 6-piece electro-funk group. Armed with tasty tunes, they came prepared to abduct minds and inspire an intergalactic warfare of shaking tail feathers. By way of the Bay Area, these bouncing individuals carry with them the proclaimed mission to ensure by the next morning each and every member of the audience would “wake up and realize how truly beautiful their booty is”.

Presented in outfits reminiscent of icons ranging from James Brown and Miami Vice to LL Cool J and Spinal Tap, the ensemble’s garb was living the words of their undeniably entertaining song, “Dress For Success” (Be sure to check out the music video on YouTube). However, the clothes would prove to be only the tip of the fun to erupt.

Vocalist Dylan Germick, sporting a horseshoe mustache to be reckoned with, kicked off the show in the spirit of a southern preacher gone mad with the beauty of booty. Between songs, his inspirational sermons affirmed the crowd of their sexiness and extended the invitation to show off what your momma gave ya! From beginning to end, the show played as a concept that may have just elicited smirks at first but had everyone believing and getting their cheeks on the floor by night’s end.

Not to get too caught up amongst the posterior puns, it should be noted that, above all, Planet Booty packs a serious musical punch behind their antics. Dylan is joined by his brother, Nathan, on keyboards/synths and backed by some equally classy gentlemen on drums, guitar, and marimba – all of which is authenticated by the ever-so smooth sounds of the talk box. Each member displayed ample ability at their respective instruments that would satisfy even the purist of funk enthusiasts.

It would also not be a complete review without mention of the Booty’s wild dancing female companion, Lady Emasita. The Lady graced the stage looking like a member of Public Enemy’s Bomb Squad that gave up politics in favor of bass. With intense focus, her relentless moves served well as the embodiment of the seductive, often raunchy, lyrical content of the songs.

In terms of sound, a natural comparison could be made with the Canadian bred Chromeo. While the two acts certainly share inspirations, Planet Booty’s soulful vocals and powerful percussion certainly distinguish their impact on an audience. The music at times carries the swagger of hip-hop, wildness of the Isley Brothers and sensuality of Marvin Gaye.

In particular, songs like “Treat My Body Right” and “On the Flo” are so infectious you would be doing yourself a disservice not to dance. And on this specific night, the LA crowd simply couldn’t resist. The patrons jumped from the comfort of their seats in pursuit of optimum grooving pastures throughout the venue.

Through these uncertain times that we live in, often some downright crazy, sweaty, dancing madness is just what the doctor ordered and Planet Booty proves to be the right prescription. Be sure to buy a digital download of their Success EP and catch them at one of their upcoming shows in the San Francisco area if you’re in the neighborhood.

One thought on “Live Review: PLANET BOOTY at The Mint”