MARGARET CHO, the comedian and current star of Drop Dead Diva tells us: “For me I always try to be super honest, and sometimes that can get us in trouble. But that doesn’t mean that we shouldn’t be honest…“

In a candid phone interview,  Margaret Cho talks to us about her work on Drop Dead Diva and her upcoming one-woman show “Mother.”

Q. Tell us about your upcoming show, “Mother,” and why you chose that theme?

MC: I wanted to do a show that was really about my mother because its been one of the most enduring things in my standup comedy and so I thought I would dedicate a whole show to her. And to her life with me, her method of parenting, and its kind of like a very Asian thing, this idea of the “tiger mother.” I remember my mother was a little bit like a tiger mother, but not really, too. You know, she had her own style and she was really funny and really fun. And I just wanted to do a show that was just about our relationship. And also about motherhood in general because I think that’s the most important job in the world. And the least talked about. So I wanted to go into talking about motherhood and being a mother. I’m not one, but I end up mothering the whole world because I’m not one. So I guess I am one.

Q. Do you ever find yourself, and this happens with a lot of people, actually becoming like your mother, saying things you thought you’d never say, but you remember her saying to you?

MC: For me there is no way I can replicate my mother. She’s such a unique person. I don’t know if I actually have become her. Maybe, to some extent that I don’t even recognize. But that’s a very, very common thing–people become their parents when they get older. I’m sure I’m a product of my family, but I don’t know exactly how. My experience from theirs is so different. I am so American and they are so Korean. So its just a different way to come at life. Either from being an immigrant, or being someone who feels they’re entitled to their citizenship — its so different.

Q. You grew up in the San Francisco area, I actually did too, and I know its a unique place of its own. How do you think that shaped you into the person you are today, growing up there?

MC: I think being in the 70’s and 80’s around a lot of the politics that were happening in San Francisco, like Harvey Milk getting elected and then assassinated, and that incredible tragedy, and how we still work together politically and how we still formed this political point of view that is really important still, that endures with the spirit of San Francisco. And San Francisco being so progressive. I think it was a place that opened my eyes to politics and made me understand that it is really about humanity. I’m grateful that I got to be a witness to all of that.

Q. What is a typical day like for you?

MC: Usually I’ll get up pretty early if I have to go into work at Drop Dead Diva. We start sometimes at 6:00 or 7:00 in the morning. Maybe earlier. And I live an hour away from where we shoot, so on the earliest days I’ll get up at 3:30 in the morning and drive to work, and then I’ll go and shoot all day, usually until 6 or 7:00 at night. Then I’ll have dinner. Then I’ll go and do a set at a comedy club in Atlanta, or if I’m in Los Angeles, I’ll do a set in some capacity, or if I’m on the road I’ll do a set. Usually my nights are really about standup comedy, and my days are about acting. And then music falls in between any of those. And writing comes in anywhere I can fit it in. If I’m on a plane I’ll be working on my blog, and I try to blog daily. So that’s pretty much it.  I have my family and my friends and all the different relationships, who are often people that I work with, so  I see them at work anyway. So my life is really full, its filled with work, but most of it is also social time. I get to have this great social life because I hang out with the people that I work with.

Q. What comedians are you a big fan of right now?

MC:  I really love Louie C.K, Wanda Sykes, Chris Rock, Kathy Griffin. I love Joan Rivers. I just got to work with Joan on Drop Dead Diva. We had her on as one of the guest stars a couple of weeks ago and it was such an honor. I just adore her. I’m a big fan of comedy. I love to go see people and I love to perform it. And I love being friends with all these amazing comedians. I’m really lucky.

Q. Okay, going back to Drop Dead Diva. Is there anybody in Hollywood that you consider a drop dead diva?

Q. You have a lot of tattoos. How many do you have?

MC: I have 75 or 80. They’re larger pieces so its hard to say how many there are, because one will blend into the other. But my stomach is completely covered, my back is completely covered, I have them on my butt, I have them almost completely to my elbows on both arms, and one leg is almost completely covered. And the other leg is just my thigh is tattooed. So I would say 90% of my body is tattooed. I will never tattoo my forearms or my face or neck, because I’m an actor, so I want to be able to play different parts. I’ve never in any job as an actor been asked to bare anything more than my forearms, so I’ve never had an issue with my tattoos showing or having to cover them. People don’t often know I have tattoos, unless, you know, they know.

Q. Yeah, I thought you just had them on your arm. I didn’t notice that you had them everywhere else.

Q. Do you think you’ll get more?

MC: Well, I have to get a lot of what I have colored in and touched up. A lot of them are in different stages, but they still cover almost every part of my body.

Q. I’ve read a lot of your blog. You say what’s on your mind without any fear of worrying about what people will think. I commend you for that, because it takes courage. What advice would you give to other women who might be afraid of speaking their mind?

MC: I feel like we have to speak our minds. We have to talk about what’s going on, and who we are, and how we feel. I think that’s a really great gift to be able to do that with others. We can share our burdens, and share our pain, and share our sufferings with others, it does a good job of alleviating it, you know. So I really advocate honesty. I advocate communication. I think blogging is really important, that we have an opportunity now to really share our feelings with the world. I really love writing. I got that from my dad. My dad’s a writer, so he taught me how to use a typewriter when I was a very little girl. And that was an amazing thing. That has always been the way that I dealt with problems on my own, is writing about it. So blogging is something I really treasure, and its my way of communicating. I hope that all women are able to speak their mind in every way, that they’re able to communicate, so we can not be so alone. 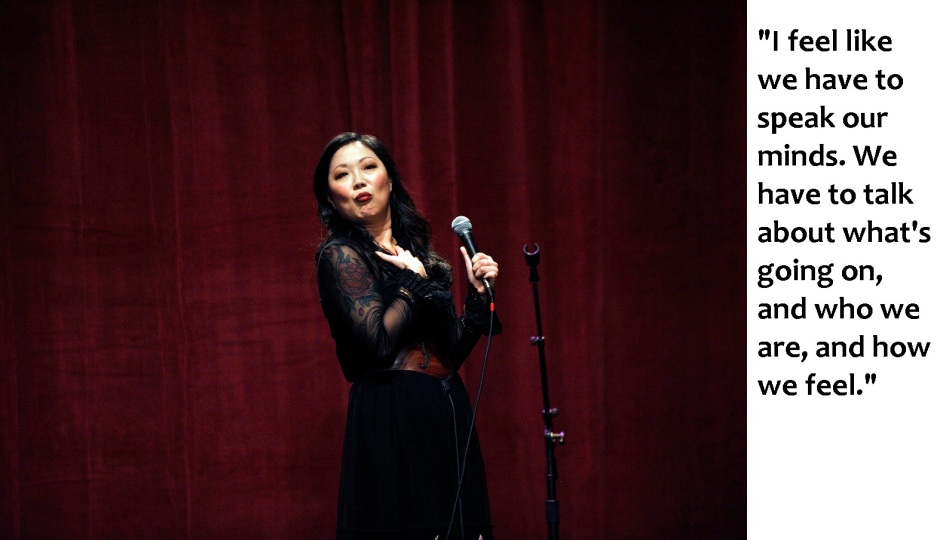 Q. Why do you think people get so offended so easily by words? Do you notice that lately everyone is hyper-sensitive?

MC: I think in a sense, you know, its like we police ourselves, which is really interesting. Now there is a lot more connection, you know, if there’s something that happens, everybody hears about it all over the world, and I think that’s great. It gives us a feeling that we are not alone, and that we have responsibility in our actions. We have to face up to what we’ve said, and what we’ve done, what we’ve put out there. But its hard as a comedian, because as a comedian you always want to challenge the status quo, and also be rebellious and outrageous. So for me I always try to be super honest, and sometimes that can even get us in trouble. But that doesn’t mean that we shouldn’t be honest about what we’re saying. And people will react to things in so many different, unpredictable ways. But for me, I think I kind of come at everything with a sense of compassion, so I feel like that’s what we need, is compassion. I do think its cool that everyone knows what’s going on with the world. We have all of our social networks and our phones that will record things, and that makes life so much more rich and interesting.

Q. Under what circumstances do you find you are most creative in coming up with material?

MC: I think its really when I really devote myself to paying attention to what I’m doing and looking at jokes and working on them. I’ll record myself and I’ll listen to it, I’ll figure out the best way to tell a story, or the best words to use. So its sort of when I’m more focused on the mechanics of what I do, that’s really what brings out everything else. I mean, I’ve been a comedian longer than I’ve been anything else, and its what I’ve what always wanted to do, and so the art form is always very fulfilling to me. But when I get really into structuring a show, that’s when I think I’m most creative.

Q. One last question about ‘Mother.’ Are you going to be adding dates, do you think you’ll have a show in the Los Angeles area?

MC: Yeah, eventually. What I’ll do is a club tour, and then do a really big tour. I just wanted to go and visit places that I hadn’t been for a long time. And I’ll end up probably doing another season of Drop Dead Diva, and then go on a major, international tour of ‘Mother’ after that…And definitely L.A., which is my home.